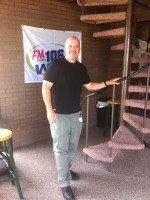 Willie Wright moved to Madisonville, Kentucky one year ago when he accepted the Operations Manager position at Commonwealth Broadcasting.  You might recognize the name if you listen to 106-9 WTTL during the mid-day hours or have been to any of the Madisonville Miners home games this season where he is the PA announcer.  Luckily, he was familiar with the YMCA having lived in Memphis previously and being a member of their association.  He says the Hopkins County Family YMCA’s class offerings and equipment are what originally drew him to our facility.

Willie became an early-morning and late-evening regular, familiarizing himself with our cardio and weight equipment.  It wasn’t until April of this year that he decided he needed to find something to “kick his core.”  On April 20, Willie decided to start watching his diet and then added YMCA Group Exercise classes in May.  In just 3 short months, he has lost 20 pounds and told us his body feels 10 years younger!  Although Willie has tried the majority of the Y’s fitness classes, he credits our BodyPump class for getting him in shape.  In his words, “BodyPump works all of your muscle groups and your body never gets comfortable.”   He also credits the YMCA in helping him lose weight by having so many different options to get in shape and keep in shape – including a variety of classes, numerous pieces of cardio and weight equipment, and a helpful staff.

When asked what his advice is for anyone nervous to try a Group X class for the first time; his response is, “Just do it!”  Willie says fitness classes are for everyone.  He also adds how important it is to fight through the awkwardness of learning the moves until you get them down, and to never let yourself get into a routine.  Group Exercise classes are a great way to “keep your body guessing!”  With over 45 fitness classes offered per week at the YMCA and Y Express, we have something for everyone …. and they are FREE to members!